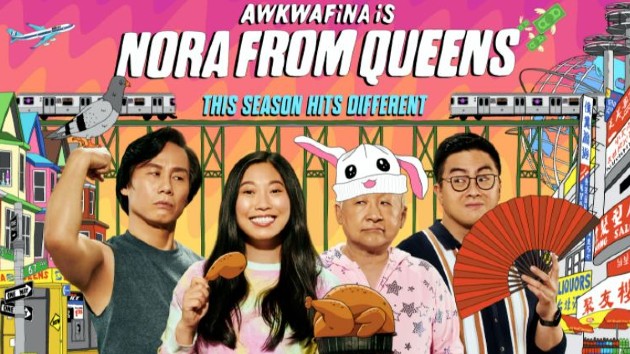 Tonight on Comedy Central, the acclaimed comedy Awkwafina is Nora from Queens returns for its second season with two episodes airing back to back at 10 p.m. ET/9 p.m. CT.

The comedy, loosely based on the life of the Raya and the Last Dragon and Shang Chi star, centers on her character and her friends and family in the New York City borough.

Bowen Yang plays Nora’s bestie Edmund. He tells ABC Audio that learning the show was renewed was a thrill.

“For sure,” the Saturday Night Live cast member says. “I mean…it’s always sort of a big question mark as you come out with something for the first time and the initial sort of stage of what the audience responds to. But then, there’s not only a comfort going into this season, but also just…a relief and an emotional aspect to returning to the season after being off for almost a year and a half.”

Stage and screen legend Lori Tan Chinn steals nearly every scene she’s in as Nora’s outspoken grandmother. She tells ABC Audio that it’s been funny feeling fans’ love. “I’m surprised at the comments and the reaction,” she says.

“I get a lot of people who want to carry my dirty laundry to the laundromat,” Chinn adds, laughing. “People who congratulate me. So a lot of feedback.”

Law & Order and Jurassic Park series star BD Wong plays Awkwafina’s dad, Wally. He says of his onscreen daughter and show co-creator, “Special people, stars, bring special energy to all sorts of situations. And Awkwafina is definitely one of those people.”