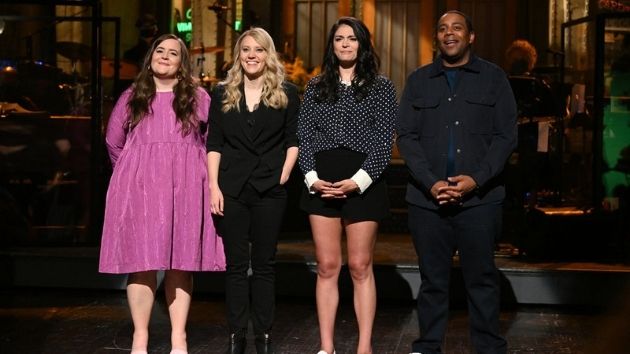 It was another season in the books for Saturday Night Live, with the entire cast saluting the long-running comedy show’s 46th season in the cold open.

With Aidy Bryant, Kate McKinnon, Cecily Strong and Kenan Thompson taking the stage first, the four recalled the wild ride they’ve been on for the past few months.

The cast reflected on how the past year tested their emotions, with Strong admitting it “made a lot of us crazy,” Bowen Yang remarked, “We went from doing very weird shows at home to terrifying shows in person.”

“Everyone else was fleeing New York, but Lorne [Michaelswas like, ‘We should go back… For comedy’,” Ego Nwodim deadpanned.

“At the beginning, our audience was mostly first responders, doctors and nurses,” McKinnon recalled, of which Bryant interjected, “Which sounds really nice, but we quickly realized that a doctor who just left the E.R. after a 36-hour shift is maybe not the best audience for comedy!”

The cast also reflected on the various events that happened during the season, such as disgraced country artist Morgan Wallen breaking COVID-19 protocol and postponing his performance until cancelling outright to spending 15 minutes parodying the fly that landed on former Vice President Mike Pence‘s head during the second presidential debate.

Chris Rock also made a surprise appearance to explain just how much has changed since he opened season 46 as host, saying that night “feels like six years ago” and revealed he had wanted Kanye West as the musical guest — but the rapper announced his presidential campaign.

Thompson remarked that, despite the craziness, “Mostly we remember how lucky we are to have a job in a time when so many people were out of work.”

SNL is slated to return for its 47th season in the fall.