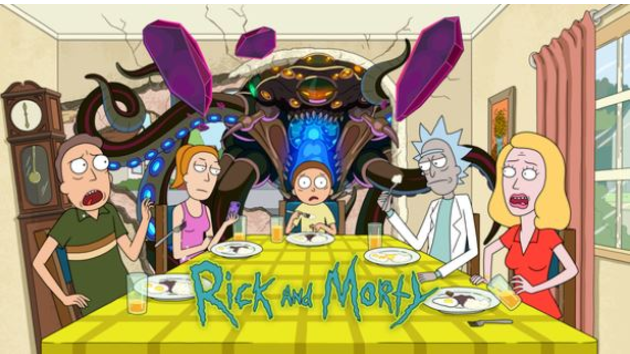 The Adult Swim series created by Dan Harmon and Justin Roiland — the latter of whom voices both title characters — announced the return in a brand-new trailer.

The snippet is full of the kind of gonzo sci-fi action and pop culture references that are the absurdist show’s bread and butter: set to the White Stripes’ hard-charging “Blue Oyster,” the trailer has the R&M gang facing off against a judgment council of robot dogs, dimension-hopping in S&M gear, hiding from a house-smashing giant praying mantis and, apparently, readying to pilot their own Voltron robot.

In other words, par for the course for the series, which centers on a sociopath scientist and his nervous grandson and the rest of their dysfunctional family.

Additionally, Adult Swim has declared June 20 global Rick and Morty Day, in which fans will get a “megadose of access and content of all things Rick and Morty” across TV, social media, streaming and more.

ABC Audio recently caught up with Machete star Danny Trejo, who explained why he jumped on the Rick and Morty train as one-man killing machine Jaguar in season 3’s acclaimed “Pickle Rick” episode.

“You I didn’t know who Rick and Morty was! I never watched.” Trejo laughed. “And then my kid [goes], “Are you kidding, Dad? That’s the biggest thing on television, man!"”

Now, he explains, “Everywhere I go: ‘Whoa! The Jaguar!’