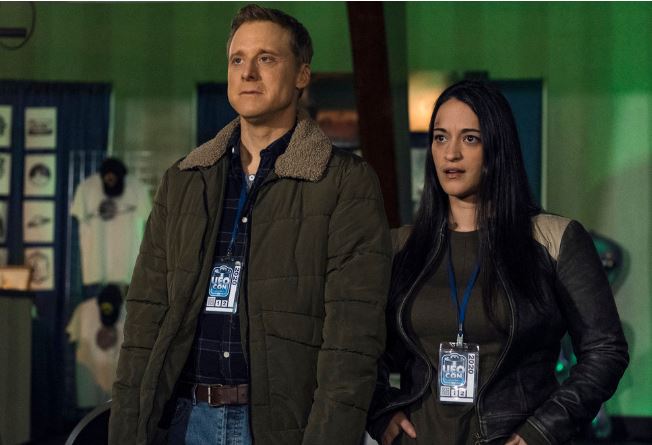 (NEW YORK) — SyFy’s quirky comedy Resident Alien, in which Firefly and Rogue One star Alan Tudyk plays an alien in disguise as a small-town doctor, was just renewed for a second season.

“He says something like, ‘OK, so here’s the problem, you know, it was wintertime in season one, which means we really need to be in summertime in season two,’ Tomko says, imitating Sheridan’s serious tone, “And so we’re not really sure, like when we should start shooting and we just have to find out if we got picked up, which we did, I found that out about an hour ago. So I guess we’re going to have to shoot…"”

“He kept this up for like four minutes,” Tomko laughs, until they realized he intentionally glossed over the good news, at which the cast started screaming with joy.

The news was “so exciting,” Tomko admits. “We were hopeful and we were feeling pretty positive about it, but…in this…pandemic, not really sure what the networks are wanting to do moving forward. So we’re just grateful that they chose us.”

For the actress, who plays nurse Asta Twelvetrees, trying to stay in character is nearly impossible with Tudyk around. She found that out while shooting the pilot, in which his disguised alien character, who calls himself Harry Vanderspeigle, performed an autopsy.

“[H]e’s like juggling intestines,” Tomko laughs of the actor’s ad-libbing. “It was so hard, so hard.”