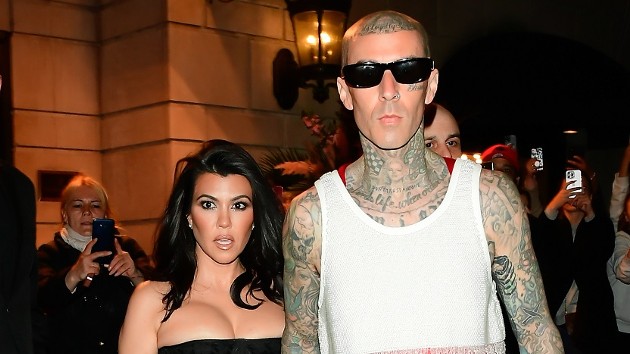 After announcing their engagement in October, Travis Barker and Kourtney Kardashian are reportedly married.

TMZ reports the Blink-182﻿ drummer and Kardashian tied the knot in Santa Barbara, California. Photos snapped at the event show Barker suited up in a tuxedo and the reality star in a white mini dress and veil as the two stand in front of a convertible with a “Just Married” sign attached to the back.

TMZ says the two legally married on the steps of a downtown courthouse. Aside from a few bodyguards, guests were sparse. The outlet adds there were people on hand to steer spectators away from the event.

This is the second ceremony for the couple, and it won’t be the last. Last month, the two crashed a Vegas wedding chapel and and exchanged vows in front of an Elvis impersonator, but later reports were that the ceremony wasn’t official. While this latest ceremony apparently is legitimate, TMZ says Travis and Kourtney are going to fly across the pond and throw a much larger and lavish ceremony in Italy.

The ﻿Kardashians﻿star first announced her engagement in October, sharing two ultra-romantic images to Instagram captioned “forever.” The snaps showed them cozying up on the beach while surrounded by a sea of red roses and flickering white candles.

Kourtney, 43, and Barker, 46, were first romantically linked in 2019, but the pair insisted they were just good friends. The two went Instagram official in February 2021.