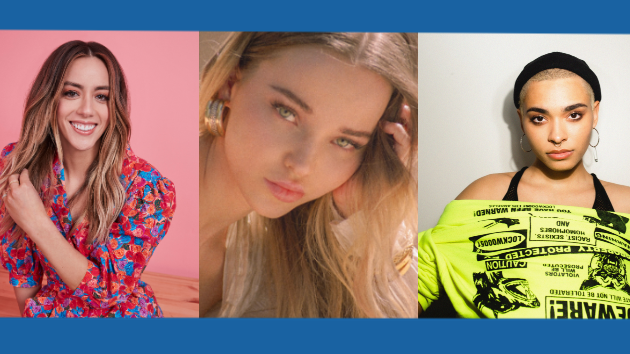 (LOS ANGELES) — The CW has found its Powerpuff Girls.

ABC Audio has confirmed that the live-action version of the hit cartoon about the pint-sized superheroes has cast Marvel’s Agents of S.H.I.E.L.D. veterans Chloe Bennet and Dove Cameron, as well as Jagged Little Pill stage actress and recording artist Yanna Perault.

Bennet, Cameron, and Perault will play grown-up versions of, respectively, Blossom, Bubbles, and Buttercup in the forthcoming CW series.

Based on Craig McCracken’s hit Cartoon Network animated show, the three Utonium Sisters got their start as lab-created super-girls. But according to a description from the network, the show, co-produced by Juno Oscar-winning screenwriter Diablo Cody, paints the heroes as “disillusioned twenty-somethings who resent having lost their childhood to crime fighting.”

Bennet’s Blossom was a “spunky, conscientious, Little-Miss-Perfect child who holds several advanced degrees,” but in the new show, her, “repressed kiddie-superhero trauma has left her feeling anxious and reclusive, and she aims to become a leader again.”

Former Disney star Cameron — who played one of Bennet’s enemies on S.H.I.E.L.D. — is Bubbles, the blue-skirted sweetheart of the trio. “She still sparkles as an adult,” the network notes, “but her charming exterior belies an unexpected toughness and wit. She’s initially more interested in recapturing her fame than saving the world.”

Perrault’s character was the brunette butt-kicker of the group in her crime-fighting days. Now, “more sensitive than her tough exterior suggests, Buttercup has spent her adulthood trying to shed her Powerpuff Girl identity and live an anonymous life,” says the network.

There’s no release date yet for the series.