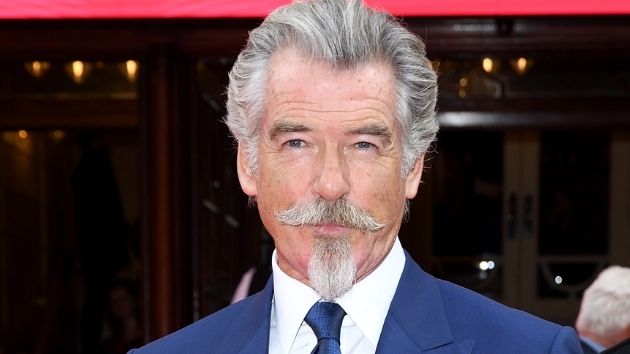 Pierce Brosnan isn’t bothered that he’s now playing the affable father figure in movies.  The Irish actor, who gained acclaim for his portrayal of James Bond in the mid-90s and early aughts, stars as King Rowan in the upcoming fantasy romance, Cinderella.

Brosnan explained to ABC Audio, “You hope to stay at the table for as long as you can as an actor. And, of course, you get older and then you have to adjust and you have to hopefully find parts that will lead you into the next chapter of your career.”

Brosnan said he’s enjoying the ride, adding, “I’m in that time in that chapter of life now playing the fathers, the grandfathers, the wizards [and] the Kings!”

He certainly enjoyed playing King Rowan and revealed that he used his charm to convince writer/director Kay Cannon to make his part even more special — by giving him a solo.

The Golden Globe-nominee, who declined to divulge more about his solo, also spoke about making peace with Cinderella skipping theaters because of COVID-19.

“You cannot have such petty concerns in a time of a pandemic,” said Brosnan. “You just wish for people to be embraced by the entertainment of it all and to be able to share it in their homes with their family and their children.”

While he admits seeing Cinderella on the big screen would’ve been “wonderful,” he notes “it’s not meant to be.”

Cinderella waltzes into your living room this Friday on Amazon Prime Video.