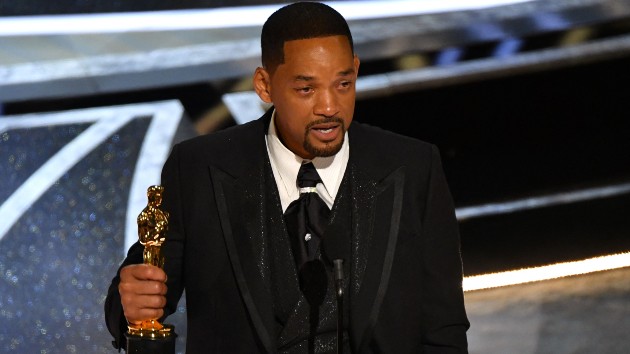 After a shocking altercation with Chris Rock live on the Oscars stage earlier in the night, Will Smith took home the Oscar for Best Actor.

The 53-year-old actor won for his role in King Richard and very quickly after getting on stage became emotional with tears streaming down his face.

After a brief point about his character, which is based on tennis stars Serena and Venus Williams’ father Richard, being a “fierce defender,” he began reflecting on where he is at this point in his life.

“Denzel [Washington] said a few minutes ago, ‘At your highest moment, Be careful, that’s when the devil comes for you,"” he added.

His words seemed to reference the earlier incident, where he slapped and cursed out Rock for making a joke about his wife Jada Pinkett Smith.

Smith continued his acceptance speech and apologized to the Academy and explained the reasoning behind his emotions, stating, “I’m not crying for winning an award. It’s not about winning an award for me. It’s about being able to shine a light on all of the people.”

Noticeably, his speech did not include an apology to Rock.