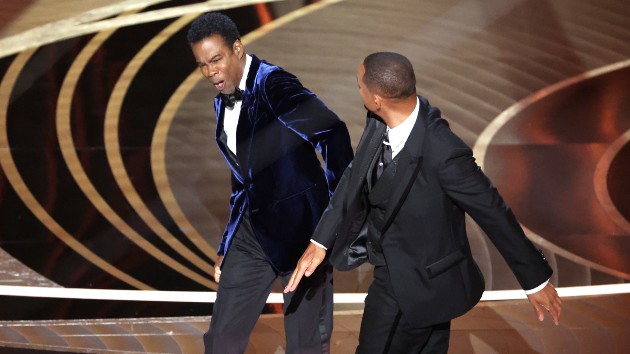 Things became a little tense when Chris Rock made a joke about Jada Pinkett Smith while presenting the Oscar for Best Documentary.  It earned him a slap and a cursing out from Will Smith — all live on air.

Chris first joked that Javier Bardem cannot win the Best Actor Oscar if his wife, Penelope Cruz, misses out on Best Actress.  “If she loses, he can’t win,” Rock stated. “He is praying that Will Smith wins, like, ‘Please, lord!"”

Chris then turned his attention on Pinkett Smith and remarked, “Jada.  Love ya.  G.I. Jane 2, can’t wait to see it!”  The joke didn’t land with the Smiths; the camera cut to Jada rolling her eyes in what appeared to be disgust.

Rock tried defending his joke, saying, “That was a nice one” but quickly said “uh oh” as Will stormed the stage.  The King Richard actor slapped Rock and, after walking off the stage, shouted “Keep my wife’s name out of your f****** mouth” at him twice.  The audio broadcast was cut before any profanities were said on air.

Rock appeared rattled by the unexpected altercation, which he dubbed, “The greatest night in the history of television.”  He also flubbed while announcing the category’s winner, saying “We are here to give a documentary out,” meaning to say “give an Oscar out for Best Documentary,” which was given to Summer of Soul.