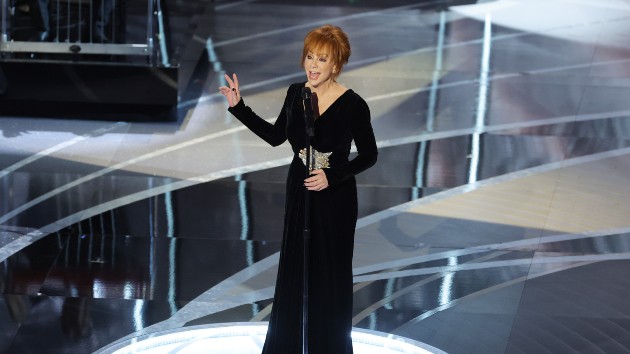 Reba McEntire took the Oscar stage for the second time in her career Sunday night, to perform “Somehow You Do,” the Oscar-nominated song from the film Four Good Days.

Reba sang the song, written by 13-time nominee Diane Warren, while wearing a black gown with huge jeweled detail in the front. Her hair was up and she wore a pair of simple earrings.  In the audience, Warren applauded Reba wildly.

Her previous Oscar performance came in 1991: She sang the song “I’m Checkin’ Out,” from the Meryl Streep film film Postcards from the Edge.

Monday just happens to be Reba’s birthday, so no matter if the song wins or loses, it’s safe to say she’ll be celebrating tonight.

On a more somber note, immediately following Reba’s performance, the Oscars held a moment of silence for Ukraine.

Thank you for being a friend: ‘The Golden Girls’ restaurant opens in Los Angeles on Saturday

In Brief: James Franco returns with ‘Me You’, and more