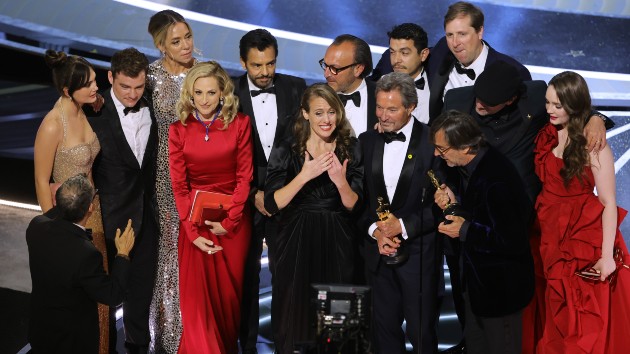 This marks the first time a movie from a streaming service claimed the night’s highest honor, as it was offered by Apple TV+.  The movie’s producers, Philippe Rousselet, Fabrice Gianfermi and Patrick Wachsberger accepted the award and thanked the Academy “for letting our CODA make history tonight.”

They also spoke about the numerous difficulties they faced filming the groundbreaking movie, such as delaying scenes shot on the ocean at 4 a.m. because of inclement weather.  Despite everything, they praised director ﻿Sian Heder﻿, who “kept the boat afloat and you’ve been the best captain a producer can ever dream of, really.”

CODA became the film to beat on Sunday, winning all three awards for which it was nominated — Best Actor in a Supporting Role, which was won by Troy Kotsur, as well as Best Adapted Screenplay and Best Picture.

CODA ﻿is a heartwarming story about a musically talented teenager, played by ﻿Emilia Jones, and her relationship with her deaf parents and deaf brother.

The award was presented by ﻿Lady Gaga ﻿and ﻿Liza Minnelli﻿.