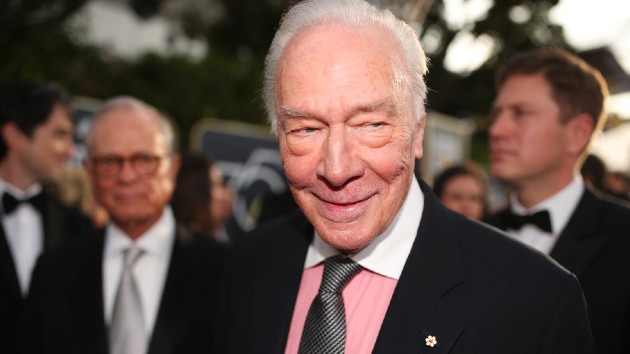 (CONNECTICUT) — Christopher Plummer, the acclaimed Canadian actor perhaps best known for his role in The Sound of Music, has died. He was 91.

The Oscar winner died at his home in Connecticut with Elaine Taylor, his wife and best friend of 53 years, by his side, his manager confirmed to ABC News.

“Chris was an extraordinary man who deeply loved and respected his profession with great old fashion manners, self-deprecating humor and the music of words. He was a national treasure who deeply relished his Canadian roots. Through his art and humanity, he touched all of our hearts and his legendary life will endure for all generations to come,” Lou Pitt, his longtime friend and manager of 46 years, said in a statement.

Plummer, who began his career on stage, made his film debut in 1958’s Stage Struck and went on to a successful movie career that spanned more than six decades.

He starred in a vast variety of films, including The Return of the Pink Panther, Murder by Decree, Star Trek VI: The Undiscovered Country, A Beautiful Mind, Up, The Imaginarium of Doctor Parnassus, All the Money in the World, The Girl with the Dragon Tattoo and Knives Out.

He earned his first Oscar nomination in 2010 for playing Leo Tolstoy in The Last Station. He told Canadian television just before the Oscar broadcast, “Well, I said it’s about time! I mean, I’m 80 years old, for God’s sake. Have mercy.” He lost that year to Christoph Waltz.

Two years later, at 82, he won the Academy Award for best supporting actor in Beginners.

Accepting the award, he famously quipped, “You’re only two years older than me, darling. Where have you been all my life?”

But Plummer remained best known to film audiences as the patriarch of the singing von Trapp family, starring alongside Julie Andrews in the 1965 hit musical The Sound of Music.