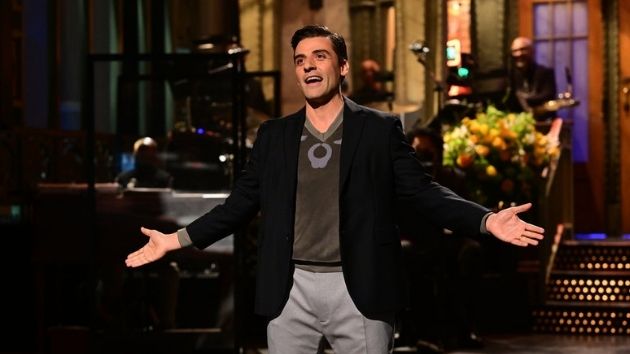 Oscar Isaac, star of Marvel’s upcoming Disney+ series Moon Knight, made his Saturday Night Live hosting debut over the weekend, and used his opening monologue to joke about what he described as his “full circle moment.”

Isaac revealed that his film debut, “The Avenger” — not The Avengers — was a home movie he “wrote, directed and starred in when I was 10 years old,” and brought clips from the film as proof. “It was shot on location in my buddy Bruce Ferguson’s backyard, in our hometown of Miami, Florida. I play a ninja assassin training to fight his nemesis,” he explained.

One clipped showed Isaac “acting his heart out” while his friend’s dad can be seen cleaning his pool in the background.

Another clip featured the Dune star playing dual roles, one of whom was licking blood off of a sword.

“Now you may be asking, Oscar, why are you using your monologue to show us old home videos? And the reason is, it’s important to encourage kids to be weirdos,” said Isaac, licking a bloody prop sword handed to him on stage. “Because every once in a while, one of those weirdos grows up to host SNL.”

“I said to Hollywood, ‘You can pick two of these names.’ Guess what they went with? The white ones,” he joked. “I’m half Guatemalan, half Cuban — or, as casting directors call that, ‘Ethnically ambiguous.’”

“According to them, I can play anything from a pharoah to Timothée Chalamet’s daddy,” he added.