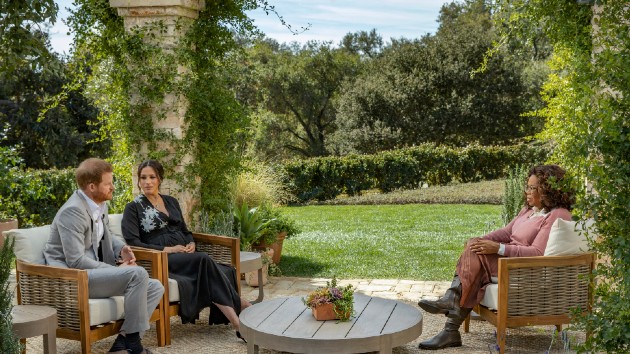 (LOS ANGELES) — One of the bombshell accusations leveled by Meghan Markle and Prince Harry during Sunday night’s Oprah Winfrey interview Meghan and Harry: A CBS Primetime Special was that there allegedly were “concerns” within the royal family about the skin color of the duke and duchess’ mixed-race children.

However, during a conversation with her bestie Gayle King on CBS This Morning, Oprah threw cold water on speculation that it was Queen Elizabeth or her husband, Prince Philip, who made the comments.

“[Prince Harry] did not share the identity with me,” as to who raised the concern, Winfrey explained, clarifying, “he wanted to make sure that I knew and, if I had an opportunity to share it, that it was not his grandmother nor his grandfather that were a part of those conversations.”

During the marathon chat with the couple, Markle, who is biracial, said she and Harry were “blindsided” by racist comments that were made both in the media and within what she called “The Firm,” a reference to Buckingham Palace.

Harry commented that he has a good relationship with his grandparents, though he noted that his father, Charles, Prince of Wales, had stopped taking his calls, and that the Royal Family had cut him off financially.

Meghan and Harry: A CBS Primetime Special drew huge numbers for CBS, attracting more than 17 million viewers for the network, according to preliminary numbers quoted by The Hollywood Reporter.

Hayden Panettiere opens up about struggle with alcoholism, postpartum depression