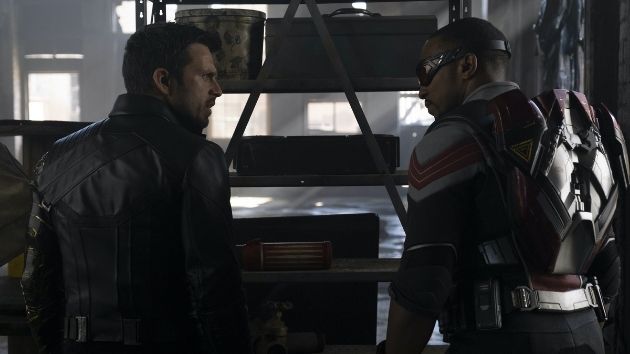 That film ended with a very old Steve Rogers passing his Captain America shield and mantel to Wilson, and a central part of the series is Sam’s doubt he’s worthy of it.

The show also hinges on what the world is like after The Blip: when half the world’s population suddenly reappeared, five years after Thanos snapped them out of existence.

Director Kari Skogland is a veteran of shows like The Handmaid’s Tale and The Walking Dead, but the six-episode series was her first jump into the MCU. She tells ABC Audio that Mackie and Stan made her job easier.

“Oh, my gosh, it was so fun because they are also very good friends in life…They love to crack each other up. And so from that perspective, really, I just had to sit back and watch.”

Head writer Malcolm Spellman said the series is in the vein of classic buddy films, known in the industry as “two-handers.”

“On the spectrum of ‘buddy two handers’, you have Defiant Ones and 48 Hours on the dramatic end, and there’s an arc that takes you all the way to the most comedic end with Rush Hour and Ride Along; somewhere in between there lives Lethal Weapon 1 and Bad Boys. And that was sort of a created such an easy bullseye for this … creative team to aim at.”