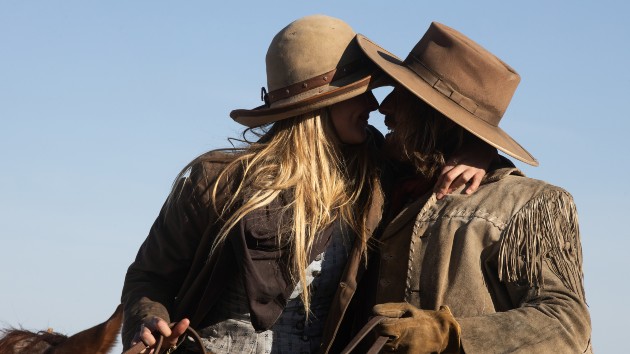 (SPOILERS AHEAD) 1883 viewers didn’t see this one coming, as the road west came to an end for a fan-favorite on the latest episode of the popular Yellowstone prequel on Paramount+.

Cowboy-for-hire Ennis, played by Eric Nelsen, met an untimely death while protecting Isabel May’s Elsa Dutton  and their band of pioneers from a gang of marauding prairie bandits. Oh, and the couple had just gotten engaged too.

“It still hurts for me to even think about it,” Nelsen tells ABC Audio. “I remember reading the script for the first time and just crying…I had no idea it was coming.”

The Ennis/Elsa coupling had become a lighter spot in a story set against the backdrop of the dangers of westward migration across the American Frontier. In a lot ways, Nelsen said something like that had to happen.

“It’s safe to say, nobody is safe,” he says. “Tragedy is throughout this entire series…these people went through this, and it gives you so much more respect and appreciation for what we have, from what these early settlers went through.”

And even though it looks like his time on 1883 has wrapped up, he called it “life changing” being able to work with show creator Taylor Sheridan and co-stars like Tim McGraw, Faith Hill and Hollywood heavyweight Sam Elliott.

“The main thing I learned from Sam was overall kindness,” Nelsen says. “He’s got such a way with people. He’d be filming all day long and he’d finish his scenes, and there would be two more and after his. He’d sit and watch and support everybody else who was filming that day.”

New episodes of 1883 are available Sundays on Paramount+.