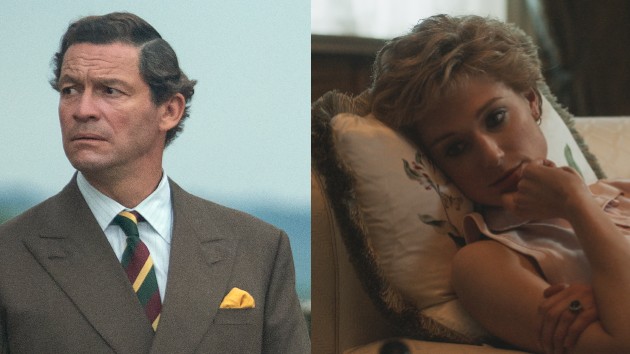 Netflix has released the first images of The Crown‘s newest cast members to play Prince Charles and Lady Diana in the in-production fifth season of the Emmy-winning drama.

Dominic West, a veteran of the acclaimed show The Wire, and films including 300, is a dead ringer for a greying Charles in the early ’90s as his marriage to Princess Diana continued to crumble. They divorced officially in 1996.

Guardians of the Galaxy Vol. 2 and Tenet veteran Elizabeth Debecki is shown with her head on a pillow, looking haunted. Diana, of course, battled an eating disorder and constant tabloid pressure as their royal marriage splintered amid Charles’ extra-marital romance with his current wife, Camilla Parker Bowles, leading to Diana’s own affair with James Hewitt, played in the series by Daniel Donskoy.

In The Crown’s fourth season, Emma Corrin plays a younger Diana Spencer, who falls for and eventually marries Josh O’Connor‘s Prince Charles in 1981.

The Crown season five debuts on Netflix in 2022.