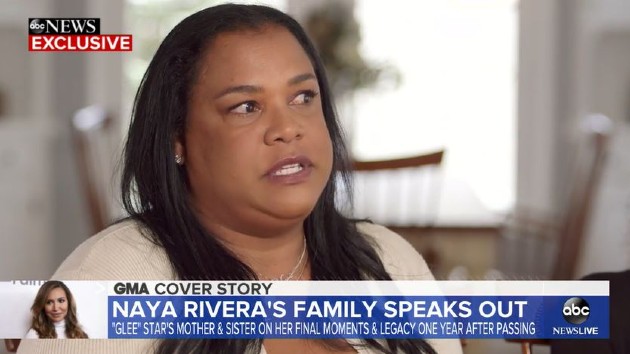 Naya Rivera‘s family is honoring her memory, and who she was as a daughter, sister, mother and artist, on the one-year anniversary of the Glee star’s tragic death.

Naya’s mother, Yolanda Previtire, told ABC News’ Juju Chang and Good Morning America the sadness associated with losing her daughter often becomes too much for her and her family to deal with.

“Sometimes we’re afraid of the sorrow being so heavy that we’re afraid for our own self, ’cause this is hard. There are no words to describe what we’re going through,” Yolanda said. “All we know is we have each other.”

Yolanda also noted that the family is in therapy to help with the shared trauma.

Naya’s younger sister, Nickayla Rivera, told GMA that what keeps them going is “taking that one day at a time and living it to the fullest, loving each other to the fullest, and not regretting anything. Because I know if we could go back, we’d hug a little bit harder.”

Yolanda added, “I feel Naya’s energy constantly telling me, ‘Mom, be happy. Don’t cry. I’m OK. Go get Josey. Have fun.’ And I feel that it’s coming from her.”

Naya Rivera went missing on July 8, 2020, at California’s Lake Piru, where she’d spent the day with her son, Josey Hollis Dorsey, who was four at the time and will be six in September. After failing to return the boat they had rented for the day, a search began for Naya and Josey. The child was found, wearing a life jacket, alone in the vessel, with Naya nowhere in sight.

Naya’s body was found five days after she went missing. The actress’ death was ruled an accidental drowning and she was laid to rest on July 24, 2020. She was 33.