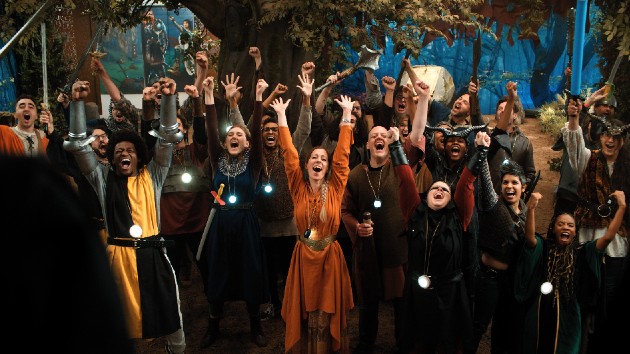 In a workflow that other programs, including awards shows, have since adopted, the cast shot themselves, and the footage was remotely assembled into the finished product.

With vaccinations currently rolling out all over the country, the episode plays differently. It’s a moment trapped in amber: the fear, the isolation, and trying to find some normalcy in a world that has changed. That said, ABC Audio asked show stars Charlotte Nicdao, Jessie Ennis and Imani Hakim if they’ve revisited the influential episode.

“This is embarrassing, but I actually sometimes pull up the Rube Goldberg machine [Zoom scene] at the end when I need a boost,” says Nicdao, who plays Poppy. “It feels really good to watch. But then also on top of that, it’s all my friends in these boxes. So…sometimes I do just pull that scene up and I’m like, ‘Yes!"”

“Quarantine” was important, explains Hakim, who plays Dana. “[W]e were able to create something so special in the middle of such challenging times. I appreciate that that episode meant a lot.”

Ennis, who plays Jo, adds, “I remember when we were shooting that having the sense of urgency that we had to get it done ‘before the pandemic was over’…And then I watched it a couple months ago and was still the state of the world.” (AUDIO IS ABC 1-ON-1)

Ahead of Mythic Quest season 2 dropping in May, a new special episode called “Everlight” jumps forward in time to where the pandemic is in the rear-view mirror. It debuts on Apple TV+ Friday.