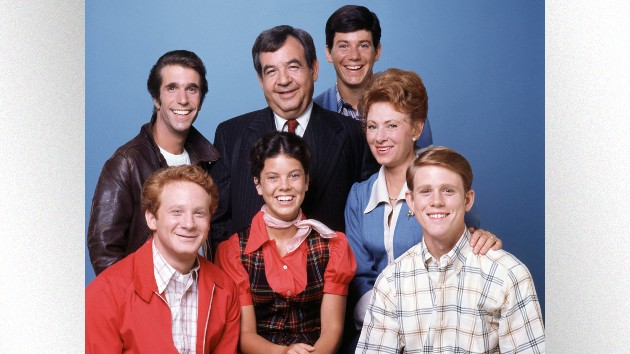 According to a new survey, Marion Ross‘ Happy Days character Marion Cunningham gets the thumbs up over all other classic TV show moms.

The makers of the game Boom Again created a March Madness-like nationwide bracket in which “Mrs. C” faced off against the mothers in classic boomer-age sitcoms, from Carol Brady to Morticia Addams, and in the end, Ritchie and Joanie’s mom was the tops.

More than 6,000 votes were tallied in the match-up, with all comers falling by the wayside — from Jane Jetson to June Cleaver, to All in the Family’s Edith Bunker and Good Times’ Florida Evens — until just Mrs. C and Partridge Family matriarch Shirley Partridge were left as the last moms standing.

In the end, Cunningham bested Partridge with a majority 56% vote.

That said, users were asked what their favorite qualities were about the TV moms who were tested. Shirley Partridge won praise as a single mom who “didn’t have a housekeeper or husband, but she made it work,” while Edith got points for standing up to her husband Archie and supporting her daughter Gloria’s feminism.

Mrs. Cunningham was praised as the “mom we all wanted.” She “accepted her kids’ friends and supported their dreams” and was “ahead of her time,” according to the voters.