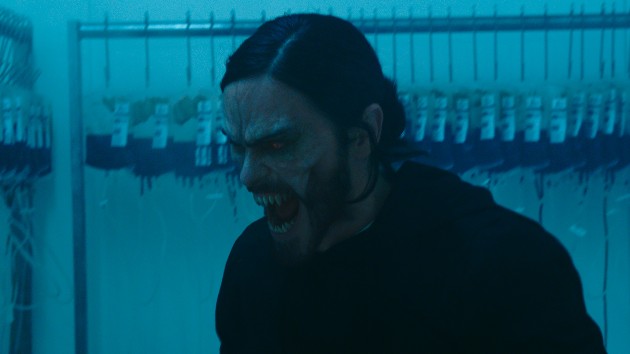 The Sony Pictures vampire superhero Morbius managed to fight off a critical drubbing to earn a respectable $39.1 million opening at the domestic box office, enough for the weekend’s top spot. The movie, starring Oscar-winner Jared Leto as one of Marvel Comics’ Spider-Man baddies, debuted to $84 million worldwide: Decent, but nowhere near Spider-Man: No Way Home’s numbers, nor even another Spidey-adjacent Sony offering, Venom: Let There Be Carnage, which opened to $90 million domestically last fall.

The Batman took in another $10.8 million domestically for third place. Starring Robert Pattinson and Zoe Kravitz, it also crossed the $700 million mark globally after five weeks with $710.5 million, and counting.

Rounding out the fourth and fifth places in theaters over the weekend, respectively, were Tom Holland‘s blockbuster video game adaptation Uncharted, which earned $3.6 million, and the anime adventure Jujutsu Kaisen 0: The Movie, which earned a bit under $2 million.

Both films are also scoring overseas: Uncharted, from Sony Pictures, has a worldwide haul of more than $234 million, while Jujutsu’s bottom line was also boosted from foreign theaters, pushing its worldwide take to $149.1 million over the weekend.