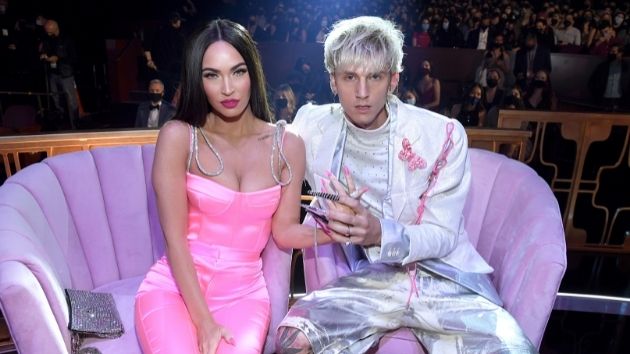 Megan Fox and Machine Gun Kelly recently celebrated their first anniversary and, on Wednesday, provided a candid glimpse into their relationship when taking the GQ “Couple’s Quiz.”

True to form, their answers were a mix of sweet, spicy and pure chaos.

Their interview starts off with the two telling the story of how they first met — which was at a GQ party — where Megan’s first words to MGK were, “You smell like weed.”

“And I said, ‘I am weed,"” Kelly smirked.  Apparently, he vanished right after that bizarre first exchange.

Megan then grilled the “my ex’s best friend” singer over how well he knows her in a series of rapid-fire questions.   MGK knows that his lover has “being abducted by a UFO” on her bucket list, that loud chewing is her “pet peeve,” her favorite book AND movie is Harry Potter and the Prisoner of Azkaban, and that her hidden talent is being “an almanac and an encyclopedia and a dictionary all in one.”

MGK’s most hilarious fail came when he forgot Megan played April O’Neil in Teenage Mutant Ninja Turtles.  In all, he answered 28.5 out of 31 questions correctly.

When the roles were reversed, Megan correctly answered 29 questions.  She revealed MGK prefers his coffee “black and bitter” — but that she makes his morning brew with oat milk and sugar “to sweeten you up” — and that he’s a secret fan of Nicole Kidman and is invested in Nine Perfect Strangers and The Undoing.

The Jennifer’s Body star also ratted out her boyfriend’s work/life balance by calling him out for rarely taking any days off and also said his favorite place is “Travis [Barker]’s studio.”