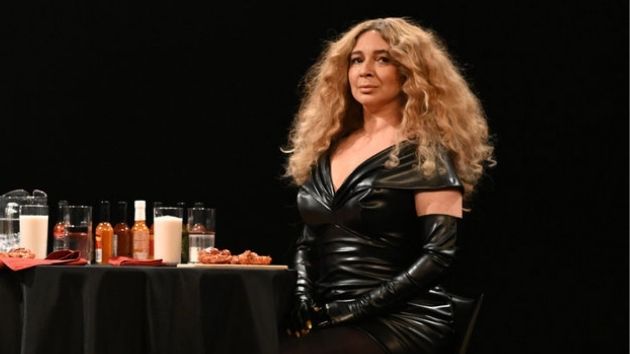 (NEW YORK) — Saturday Night Live has revived Maya Rudolph’s hilarious Beyoncé impression over the weekend by imagining what would happen if the “Lemonade” singer actually sat down for a Hot Ones interview.

Hot Ones is a real YouTube series where celebrities are tasked chow down on a plate of buffalo wings, ranging from mild to dangerously hot, before answering a series of questions.

During SNL’s skit, Rudolph’s Bey is interrogated by Mikey Day, spoofing Hot Ones host Sean Evans, who starts off the interview by saying “It is truly an honor” to have her on the show.

“I know,” Rudolph smoothly replies before adding she’s still determining if the interview is beneath her, and it all goes downhill from there.

When invited to bite into the first wing, which is covered in a mild sauce, the comedian boasts, “Mild?  Come on, now.  I’m from Texas, baby.  This girl can handle her wings.”

Rudolph’s Beyoncé hilariously squirms in her seat, trying to appear unfazed, but soon breaks out into a heavy sweat.

Still, she tries to power through and bites into another wing that is covered in a sauce with a Scoville rating of 676,000.  That wing causes her to have an epic meltdown.

“I’m sweating! Beyoncé’s head is wet!  This wing is wrecking me,” Rudolph chokes out before dousing herself in milk and demanding her stylist to remove her wig and “put six ice cubes on my head, then put my wig back on.”

The skit ends with Bey’s team shutting down the interview and seizing all the footage, threatening bodily harm to anyone who breaks the NDA.