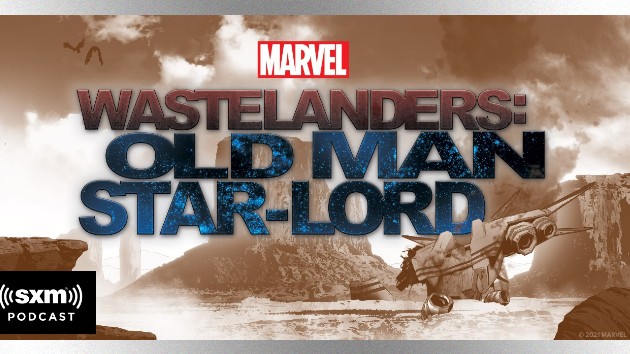 As its name suggests, the series centers on Peter Quill, long past his glory days as Chris Pratt played him in Guardians of the Galaxy and the other Marvel movies.

For Marvel Comics writer Benjamin Percy, the challenge was bringing “a visual medium” like comics to an audio-only format.

“For instance, how do you write a fight scene in audio without completely confusing your audience?” notes Percy. “How do you make them know who they’re speaking to, where they are…without just filling the dialog with clunky exposition?”

Instead, Percy looked at popular podcasts for inspiration.

“[W]hat they all had in common was they were told in an interrogative way,” he explains. “Meaning, in Homecoming, you’ve got a therapist interviewing a patient. In Serial, you’ve got journalists interviewing people.”

Percy notes that, taking a page from those podcasts, in Old Man Star-Lord, the characters are interviewed by an alien robot chronicler.

Timothy Busfield, veteran of dozens of movies and TV shows, like the hit series Thirtysomething, plays the title character. He explains with smile, “You couldn’t watch the Guardians of the Galaxy as many times as I’d seen it and not be influenced a little bit by Pratt’s performance. I mean, he’s the guy.”

He adds, “You know, I’m hopefully a nice standby or understudy for him. I love him in that role and as does everybody else.”

Busfield explains how freeing recording his role on Zoom opposite Chris Elliot, who plays Rocket, was, compared to being in a recording booth alone.  “Here I could look at Chris and provoke a response or irritate him even more, which, you know, when we’re doing scenes, so much of my job is not just to get across what Quill’s going through, but set up Rocket to go, ‘AHHHH! UGHHH!’ he says with a laugh.

“You know, I mean, which is so much of our relationship. And that was, you know, really fun.”