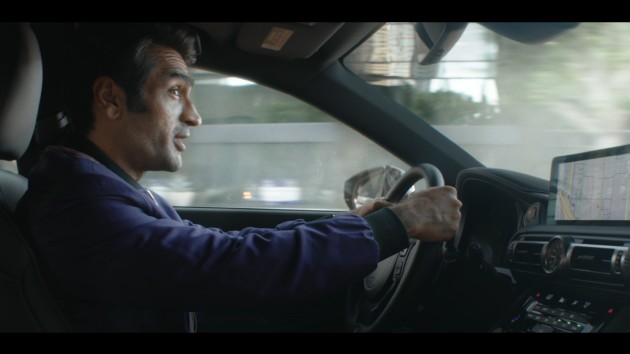 While there have been the traditional trailers for Marvel Studios’ upcoming epic Eternals, a new tease showcases Kumail Nanjiani as Kingo in — a Lexus commercial.

While the Eternals are a race of ancient, god-like heroes, the new ad shows they’re not immune to a very mortal problem: finding a parking spot. That’s just what Nanjiani’s character is trying to do in the ad, amid a major battle he’s missing out on, in part thanks to massive fireballs and other debris from the fight getting in the way.

As he’s getting increasingly frustrated, Nanjiani’s character is taking texts and calls from his fellow Eternals —  Gemma Chan‘s Sersei and Lia McHugh‘s Sprite — both of whom are urging him to get into the fight.

Eventually, he showcases his powers when he finds a spot — and blasts away a shopping cart that is headed to ding his new ride.

While an overt promotion for the film, the spot does highlight Kingo’s character — and how the normally comedic Nanjiani will be portraying him. As fans all know by now, the actor got into superheroic shape to play the character, but the spot shows his sense of humor wasn’t lost in all that muscle.