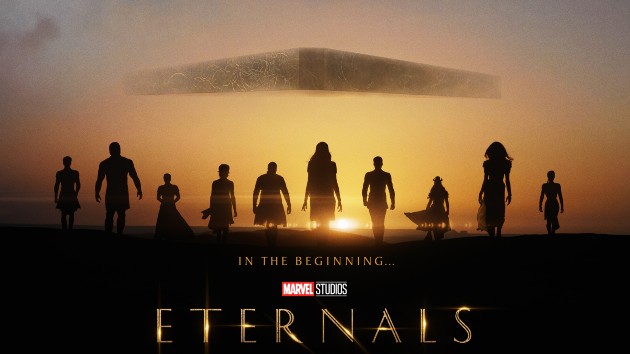 We’ve got our first real look at Marvel’s The Eternals, thanks to a brand-new teaser that dropped Monday morning.

The film centers on a titular group of super-powered immortal beings who secretly live among us on Earth, and who are locked in an ancient battle with a race known as the Deviants.

Set to Skeeter Davis‘ “The End of the World,” the teaser opens with an apparently ancient coastal civilization being visited by a sleek black spacecraft.

“We have watched. And guided,” Salma Hayek‘s Ajak says in voiceover, over visions of mankind’s great civilizations and wars. “We have helped them progress. We’ve seen them accomplish wonders.”

“Throughout the years, we have never interfered,” she continues. “Until now.”

The teaser shows snippets of each of the super-powered beings through the ages: Angelina Jolie‘s Thena, Hayek’s Ajak, Barry Keoghan‘s Druig, Gemma Chan‘s Sersi, Ma Dong-seok‘s Gilgamesh, Kumail Nanjiani‘s Kingo, Brian Tyree Henry‘s Phastos, Lauren Ridloff‘s Mikari, and Lia McHugh‘s Sprite — until they all gather for one epic “hero” shot, apparently about to face off against an unseen enemy.

For Game of Thrones fans, Kit Harrington also appears as Black Knight, who isn’t an Eternal, but was an Avenger in the pages of Marvel Comics.

For all its sweeping visuals, the teaser ends with the Eternals gathered at a rustic dinner table, apparently in the present day. McHugh’s Sprite asks, “Now that Captain Rogers and Iron Man are gone, who do you think is going to lead the Avengers?”

Madden’s Ikaris answers, “I could lead them.” Before he and the rest bust out laughing.