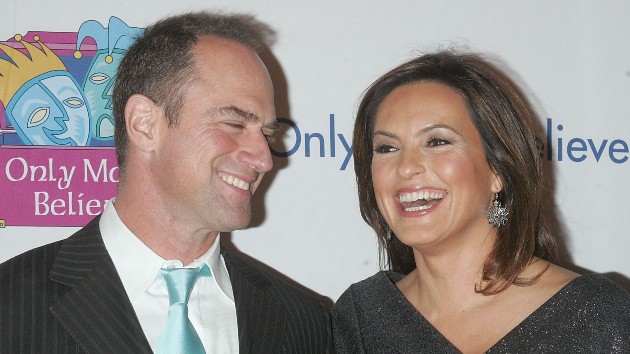 (NEW YORK) — Even though Mariska Hargitay and Chris Meloni hadn’t worked together in a decade — until recenly, that is — the two continued to enjoy a long-lasting friendship.

Speaking jointly with People on Wednesday, the Law & Order: SVU stars reminisced about working together and their first impressions of each other.

Mariska, who won an Emmy for her portrayal of Olivia Benson on the long-running drama, says her connection with Meloni was immediate.

“It happened at the screen test… I walked in, saw him, and I went, ‘That guy. That’s the guy.’ It went deep, very fast,” she recalled. “We both knew that it was something big.  I won’t say that I fully understood it, but I knew that meeting him was important and life-changing.”

Added Meloni, who played Elliot Stabler, insists “we stayed connected” even after he walked away from the series in 2011 after contract negotiations fell apart.

Which is why, he says, he came running when show execs floated a potential on-screen reunion between their characters.

“It was Pavlovian: Ring that bell, and you get right into Stabler and Benson,” Meloni laughed. “It’s simple… We have each other’s back.”

Stabler will reunite with his old partner on a special Law and Order: SVU episode to help launch another series spinoff, Law and Order: Organized Crime, of which Meloni stars.  It premieres April 1 on NBC.

The two reflected on starring on the long-running drama for 12 seasons, with Hargitay calling her co-star “solid as a rock.”

“I got to lean on it when I needed to. It was like family,” she smiled. “He’s always made me feel like I could just jump off the ledge, the cliff, the bridge, and he would catch me, in so many ways, whether it was comedy or acting or friendship.”