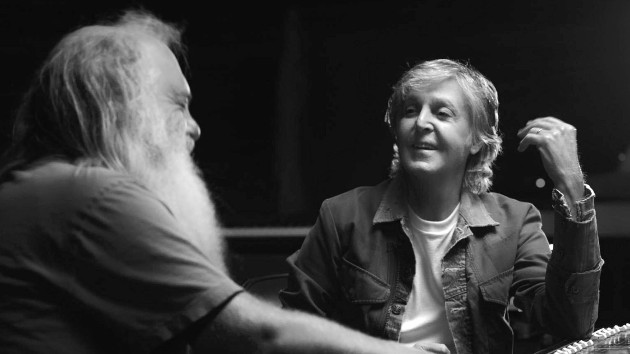 Hulu has released the trailer for McCartney 3, 2, 1, the streaming service’s forthcoming series centering on an in-depth conversation between Paul McCartney and acclaimed producer and fellow Grammy winner Rick Rubin.

Directed by Emmy Award-winning filmmaker Zachary Heinzerling and co-executive produced by McCartney and Rubin, filmmaker Peter Berg and others, the series is a exploration of McCartney’s work with The Beatles, his musical segue into “the emblematic ’70s arena rock of Wings,” and his long career as a successful solo artist.

“We were writing songs that were memorable, because we had to remember them,” Paul jokes in the trailer about his work with The Beatles, as he and Rubin explore the creation of classics like, “All My Loving,” “With a Little Help from My Friends” and “Lucy in the Sky With Diamonds,” among others featured in the just-released snippet.

According to the streaming service, the six-episode McCartney 3, 2, 1, “explores music and creativity in a unique and revelatory manner,” as Macca and Rubin have an “intimate conversation about the songwriting, influences, and personal relationships that informed the iconic songs that have served as the soundtracks of our lives.”

The series, which premieres Friday, July 16, will be available in the U.S. as a Hulu Original and internationally on Disney+ as a Star Original.