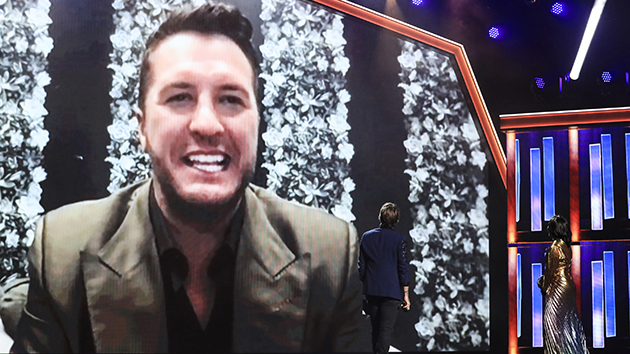 Bryan took home the big award of the night, Entertainer of the Year.  Accepting the award remotely from Los Angeles, where he’s recovering from COVID-19, he acknowledged that it has been a rough year and promised fans that he, his band and his crew will be back on the road soon.

Morris, who walked off with Female Artist and Song of the Year for her hit, “The Bones,” became emotional as she accepted the latter trophy and shouted out her co-writers and husband.  She credited husband Ryan Hurd for inspiring the song.  She closed by noting, “It’s just been a hell of a year, and hopefully, country music and maybe even this song brought you and your family some peace.”

Stapleton won for Male Artist, as well as Album of the year for Starting Over.

For the first time in ACM Awards show history, all of the nominees for Single of the Year were performed by women. A shocked Carly Pierce took home the awards for her collaboration with Lee Brice, “I Hope You’re Happy Now.”

Sunday’s ACMs also served as a message to country fans that Nashville is open for business, being telecast from six legendary Music City venues, including the Grand Ole Opry House, the historic Ryman Auditorium, The Bluebird Cafe, Broadway, Riverfront and the Station Inn.

“Tonight, while we celebrate the best in country music, we’re also celebrating the progress made by this city and cities across the country,” said Urban during the shows’s opening monologue. “We’ve all been through so much, but I’m proud to say we’re all on our way back.”

Special musical collaborations included Morris and Hurd, who made their first awards show performance together with their new duet, “Chasing After You.”

Carrie Underwood brought the house down with a medley from her new album of gospel hymns, My Savior, including a duet with gospel legend CeCe Winans.  Kelsea Ballerini and Kenny Chesney also performed their hit, “Half of My Hometown.”

Miranda Lambert had a busy night, as well, as she appeared multiple times in different locations. She and Elle King opened the show with “Drunk (And I Don’t Wanna Go Home).”  Miranda returned later, joining Chris Stapleton for “Maggie’s Song,” then joined in with Jack Ingram and Jon Randall for “In His Arms.”

Dierks Bentley also covered the U2 classic “Pride (In The Name of Love)” with husband-and-wife-duo The War and Treaty.

Other performers included Blake Shelton, celebrating the 20th Anniversary of his first hit single “Austin” with a performance of the song, followed by his latest hit, “Minimum Wage.”  Alan Jackson performed his hits “Drive (For Daddy Gene)” and “You’ll Always be My Baby.”

Entertainer of the Year
Luke Bryan

Duo of the Year
Dan + Shay

Group of the Year
Old Dominion

Album of the Year
Starting Over — Chris Stapleton

Song of the Year
“The Bones” — Maren Morris