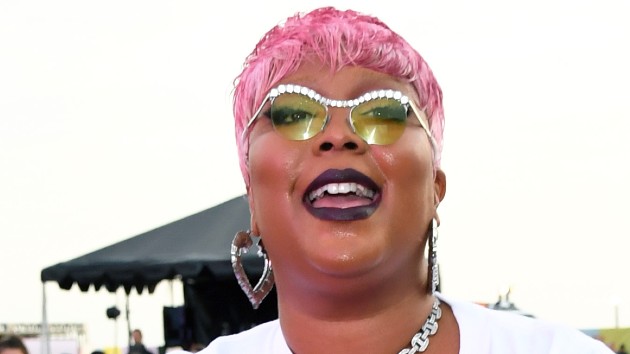 Lizzo isn’t shy when it comes to showing how she feels about Marvel hunk Chris Evans — especially after she famously slid into his DMs in April after imbibing some liquid courage.

Taking to TikTok recently, the “Truth Hurts” rapper jokingly responded to a fan that messaged her, “Lizzo baby… we know your [sic] [pregnant emoji] and we know it’s Chris Evans now spill the tea.”

Blasting the Captain America theme behind her as she addressed the so-called rumor, the Grammy winner diplomatically declared, “This is something that I’ve been really trying to keep personal and private just between me and the father of my child, but since we’re airing out all the rumors today…”

Lizzo, 33, then put her phone down so she could walk into full view for the supposed big reveal.

“I’ve been sucking in,” she jokingly confessed before sticking out her stomach.  With a wide grin, she announced while cradling her belly, “We’re going to have a little America!”

Fans went wild with the fake update, with some even joking that Marvel should include Lizzo’s announcement for an upcoming What If…? episode — a Disney+ series that takes the MCU across different universes and theoretical scenarios.

Lizzo and Evan’s rumored relationship first surfaced in April when the “Juice” singer had too much “juice” and decided to shoot her shot with the Knives Out actor.

Evans hilariously responded to her DM and wrote back, “No shame in a drunk DM.”

Prior to that, Lizzo asked Evans to marry her in 2019.  Unfortunately, he never responded to her proposal.