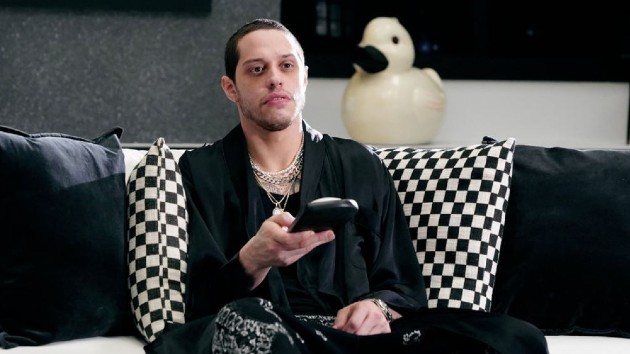 Netflix’s new ’90-Minute Movies’ section includes Ben Stiller‘s Zoolander, which clocks in at 90-minutes on the button; the classic Monty Python and the Holy Grail, which is a skosh over, at 92 minutes; and 2000’s Road Trip, from a pre-Hangover, Old School and Joker director Todd Phillips.

There’s no shortage of thrills and chills in the section as well, with the Final Destination films, Nightmare on Elm Street and Anaconda also there.

Not included are Michael Mann‘s two hour and 50-minute Heat, which Pete in the sketch says left his friends Chris Redd, Gunna and actor Simon Rex “drooling on the couch,” or Martin Scorcese‘s 3 hour, 45-minute long epic Once Upon a Time in America.

“Think about this,” Pete notes during a break in the song. “Sex and the City 2 was two hours and 26 minutes long,” compared to Jurassic Park, which “told the history of dinosaurs, how DNA works, and explained the science of bringing dinosaurs back,” all in a tight two hours and seven minutes.

So if you’re a “simple man with no attention span,” like Pete raps about, you’re in luck.