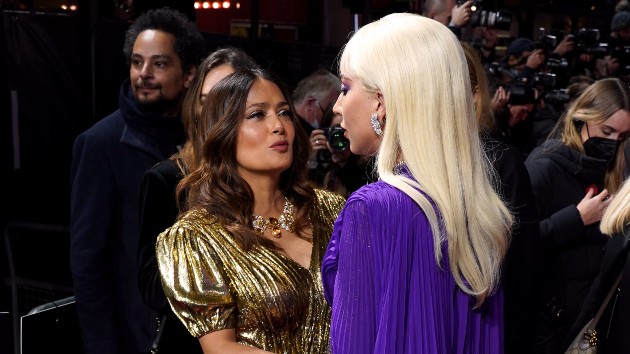 Last year, Ridley Scott, the director of Lady Gaga’s latest film House of Gucci, told the ReelBlend podcast that he wanted to release a director’s cut of the movie.  Now Gaga is hinting that the director’s cut may include scenes that show her character, Patrizia, and Salma Hayek‘s character, Pina, being, well…more than friends.

PopCrave has posted a clip from a panel on the film hosted by MGM Studios, in which Gaga says, “There’s a whole side of this film that you did not see where Pina and I developed a sexual relationship.”

As the audience laughs, Gaga teases, “Director’s cut, who knows? But this is a testament to [Ridley Scott] as a director because he let us go there.”

In the film Gaga plays Patrizia Reggiani, who hires a hit man to kill her ex-husband, Maurizio Gucci, with the help of her friend and spiritual advisor, Pina Auriemma.

“I remember being on set with Salma and going, ’So, after Maurizio dies, maybe it gets…hot?’”  Gaga continues.

If Scott does end up releasing a director’s cut, though, it’s not guaranteed that this so-called scene will be included. Meanwhile, Gaga and the film continue to rack up award nominations; next month, she’ll find out if she’s been nominated for a second Best Actress Oscar.