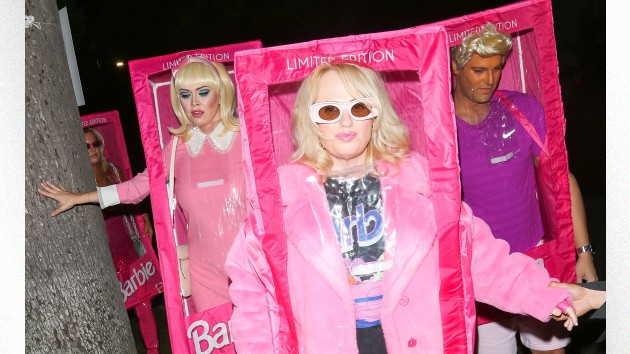 While you’ve probably already got your costume set for the big day, you can always look to Hollywood for inspiration.

The stars hit the town in costume over the weekend, with many A-listers hitting the Saturday night party for George Clooney and Rande Gerber‘s Casamigos tequila. That’s where Rebel Wilson could be seen in a Barbie-branded box, wearing a pink suit that would have probably made the iconic doll proud. Her girlfriend, Ramona Agruma, and three of their pals joined them, making quite the collection.

Other stars took to social media to show off their costumes: Janelle Monáe was stunning as Diva Plavalaguna, the blue, tentacled alien singer from the sci-fi film The Fifth Element. Speaking of blue, Kim Kardashian was head-to-toe in blue latex as the shape-shifting mutant Mystique from X-Men.

Also a vision in blue — at least from the ears up — was Lizzo, who wore a blue wig and full-body yellow makeup as Marge Simpson.