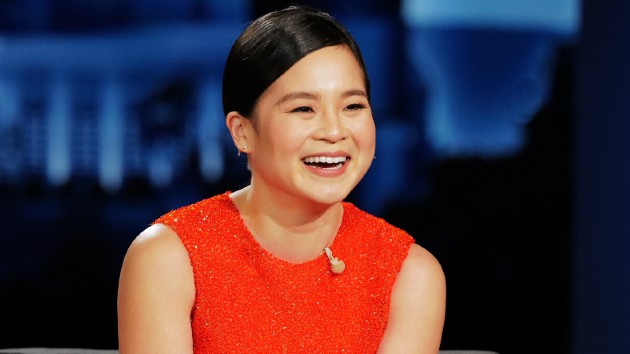 (LOS ANGELES) — Kelly Marie Tran cannot wait to introduce the world to her new movie Raya and the Last Dragon and touched upon just how hard the team worked around the ongoing pandemic to make sure it hit its scheduled premiere date.

Speaking recently on Jimmy Kimmel Live!, the 32-year-old actress, who plays the titular character in the upcoming Disney movie, revealed that she had to get crafty when it came to recording her lines.

With studios mostly shuttered because of the COVID-19 pandemic at the time, Tran explained, “I recorded in a makeshift fort at my boyfriend’s apartment.”

The Star Wars alum described that the so-called “fort” was made out of “sound blankets taped to the wall with duct tape.”

She says her makeshift recording studio was “glamorous,” highlighting the struggles she had to work around to make sure her recordings were up to snuff.

“I remember there were days when there was construction happening, my internet was cutting out… There was always something going on,” she sighed.

Host Jimmy Kimmel was happy to welcome Tran into the Disney Princess club and asked her, besides Raya, to name her favorite Disney character.

Without skipping a beat, she replied, “Mulan.”

As for how she feels about becoming a Disney Princess, Tran admitted, “It feels like a weird fever dream,” noting that she went appearing in Star Wars to starring in a feature-length animated film.

Raya and the Last Dragon premieres in theaters and to premier access subscribers on Disney+ on March 5.