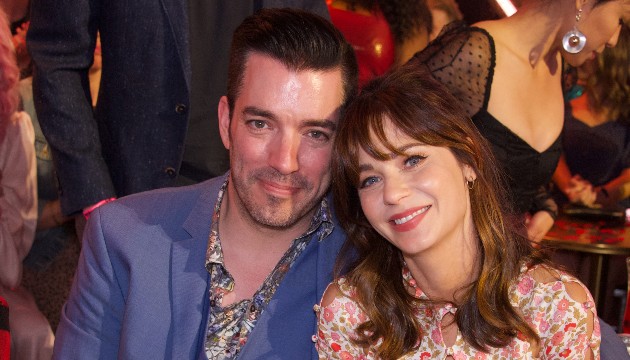 Jonathan Scott and actress Zooey Deschanel recently celebrated their two-year dating anniversary, and the Property Brothers star admitted that he knows he’s very lucky to have her in his life.

Speaking to Entertainment Tonight, the media personality joked, “I know I am dating up!”

“It means I just need to keep raising the bar and keep up with those expectations,” Jonathan clarified before diving into how his relationship has also inspired him to come up with new ideas on how to expand his Property Brothers empire. The Emmy nominee hinted that he has a new show in the works, which allows him to work side-by-side with Deschanel.

“[My brother Drew Scott] actually came up with a good concept, because Zooey is obsessed with real estate,” Jonathan teased.

As for how the Property Brothers will be allowed to fix up a random stranger’s home, Jonathan exclaimed, “Is someone going to say no if Zooey Deschanel just walks up to their door and knocks on it and says, ‘Hey, this guy will fix your house if you want it!’?”

The HGTV star also revealed that he and his brother can be credited for Hollywood’s latest hot couple — Ant Anstead and Renee Zellweger. Apparently, the two met on their show Celebrity IOU: Joyride, and Jonathan says sparks were flying between the two almost instantly.

“There was a scene where they were joking about being flirtatious, and Ant was like, via zoom, was putting on the flirty moves,” he dished. “It was just a joke, but apparently it worked!”

Drew chimed in, “He is that smooth… It’s that British accent, I tell you. He just charms with that!”