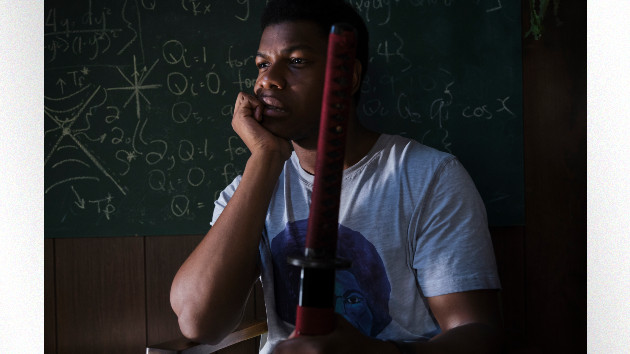 John Boyega admits he was a bit intimated by his Naked Singularity character Casi, an overzealous public defender who rails against the corrupt criminal justice system.

“I [felt] quite distant when I read the script,” Boyega tells ABC Audio. “I felt quite distant as a person to the character of Casi. I’ve never gone to school to study this practice and then going onto the field as a public defender to kind of basically help influence the fate of defendants — [it’s] kind of scary.”

In the film, which is part courtroom drama, sci-fi and heist-thriller, Boyega plays a social justice warrior who decides to help a client with a multi-million dollar drug heist. This all happens while viewers learn that the world is expected to ominously “collapse in 12 days.”

Although Boyega says he was going into uncharted territories when he took on the role of Casi, the Star Wars alum says he did eventually find some common ground with his character.

“Casi having a conflict about his position and job was where my interests were,” Boyega says.

“Because I guess as the maybe ignorant civilian who hasn’t worked in those kind of high sectors, I feel like, ‘Don’t you guys ever want to sabotage anything?"” he laughs, referring to the court cases.

“So, I guess because of that curiosity — actually dealing with a character that actually has a chance to make some real bank, some real money, and to get out of the system too — was definitely interesting to me,” Boyega explains. “So that’s where my interests — my in was.”

Naked Singularity, also starring Olivia Cooke, is in select theaters and will be available on video on demand on Friday, August 13.