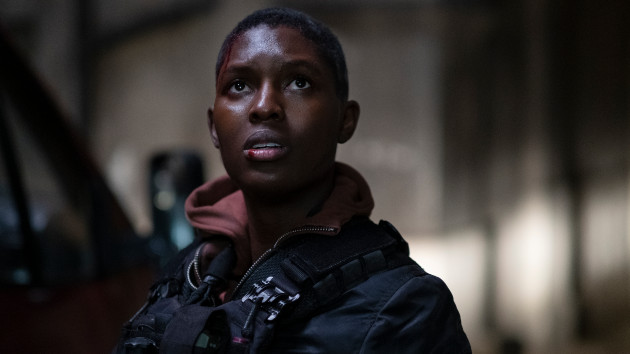 Jodie Turner-Smith is opening up about some of the struggles she faced while filming Without Remorse during the second trimester of her pregnancy.

In an interview with Cosmopolitan UK, Turner-Smith, who welcomed her first child, daughter Janie, with husband Joshua Jackson in April 2020, says making the film was “super challenging.”

“I didn’t know at the time exactly how I would feel in my body at that stage,” she says. “My lack of knowledge about the changes your body goes through… That all made it very challenging when you’re being very physical while growing a life inside of you.”

The actress says dealing with those changes — which included fluctuations with her breathing and body temperature — was a “massive… undertaking” in itself.

“So to add on top of that an extremely physical [acting] role, it was super challenging,” she says. “I learned a lot about myself through that.”

Because of the physical nature of her Without Remorse character, Lt. Commander Karen Greer, a Navy SEAL, Turner-Smith reveals she and her husband decided to rent an ultrasound to “look at the baby almost every night.”

“Because of how active I was doing an action film, I didn’t feel any movement until I was about 22 weeks [pregnant],” she revealed. “So I spent a lot of time during my pregnancy really scared.”

“I needed to look at her to know everything was OK,” she added.

Without Remorse, also starring Michael B. Jordan and Lauren London, is now streaming on Amazon.