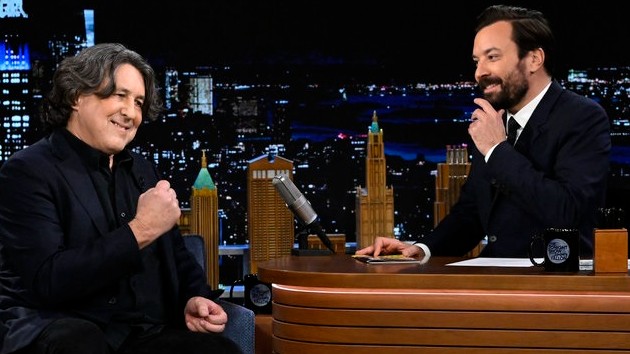 Over three years ago, Almost Famous writer/director Cameron Crowe promised Jimmy Fallon that when his musical adaptation of the film opened on Broadway, that Fallon had an open invitation to reprise his role as Dennis Hope, the future manager of the film’s fictitious band, Stillwater. And Crowe made good on that offer on Tuesday’s Tonight Show.

“My dream has always been to have you come and be the link between the two casts, the cast of the musical…and the movie, Crowe shared. “So, I would like you to come on the Broadway stage and play your part again of Dennis Hope.”

It’s not clear when and how often Fallon will appear, but he’s already grown a beard to be ready at a moment’s notice.

Fallon isn’t the only special guest performer. Crowe told Deadline that MSNBC journalist John Heilemann has expressed interest in making occasional appearances as David Felton, the Rolling Stone reporter played in the film by Rainn Wilson. No dates have been announced as yet, but it reportedly will happen.

The stage roles of Hope and the reporter are usually played respectively by Jakeim Hart and Van Hughes.

Almost Famous is based in part on Crowe’s time as a teen reporter for Rolling Stone in the 1970s. Currently in previews, the Broadway musical officially opens Thursday, November 3.