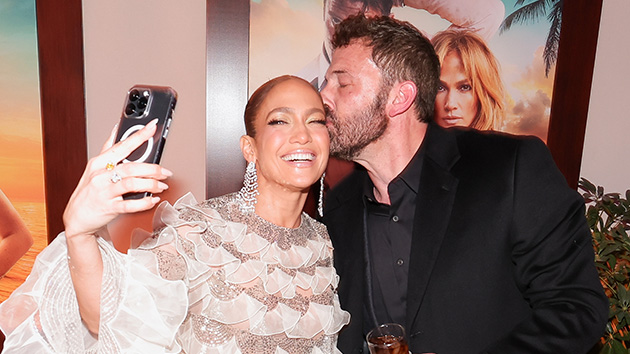 Jennifer Lopez was all smiles at the premiere of her new film, Shotgun Wedding — and shared a few things about her new album and a potential third movie with husband Ben Affleck.

Speaking with Variety, the hitmaker teased This Is Me… Now, which will become her first album in nine years. Although she has yet to confirm a release date, she did reveal, “The album is done and we’re just prepping the best time to put it out and roll it out little by little and deciding how we want to do that.”

“It’s such a special project because it’s sort of a culmination of this 20-year journey from one album to the next,” she continued. This Is Me… Now was announced on the 20th anniversary of her This Is Me… Then effort, which was about her romance with now-husband Affleck.

The couple first dated in the early 2000s before calling off their engagement in 2004. They rekindled their romance in 2021 and wed in July.

It was previously announced the new effort will be filled with “confessional songs, reflections on the trials of her past, [and] upbeat celebrations of love with her signature powerhouse vocals.”

On the topic of reunions, Jennifer was asked if she’d be interested in starring in another movie with her husband, to which she responded, “Maybe, maybe! Absolutely!” She and Ben co-starred in the 2003 movie Gigli and the 2004 film Jersey Girl, and Jennifer hinted she’s aware fans want them to pull a hat trick.

But whether or not they’ll have time to do a third movie together has yet to be seen. Said Jen, “We talk. We love being together and working together so, yeah, you never know.”