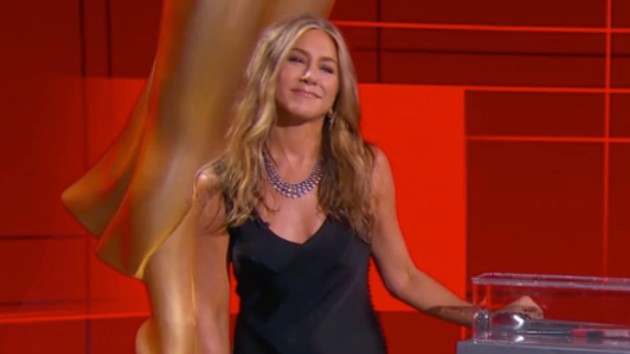 Courteney Cox may be besties with Ed Sheeran, but her Friends co-star Jennifer Aniston now has a special bond with another chart-topping British singer: Harry Styles.

Aniston was recently photographed for the new issue of InStyle wearing the exact same color-block brown-toned Gucci suit that Harry wore to the Brit Awards in February of this year.  Harry accessorized the suit with Gucci sneakers and the brand’s bamboo-handle brown leather handbag, while Aniston paired it white, high-heeled Gucci loafers and a Carolina Bucci scarf.

Fans went crazy over the two stars’ twinning moment, especially because, as some pointed out, Harry said that Aniston was his first celebrity crush.  Jennifer has now reacted by posting a side-by-side photo of herself and the “Watermelon Sugar” singer on her Instagram Story, with the caption, “Just call me Harriet Styles.”

And this isn’t the only time the two stars have twinned: Writer Evan Ross Katz posted a side-by-side shot of Harry wearing a white t-shirt that reads “Save the drama for your mama,” which is identical to a t-shirt that Jennifer’s character Rachel Green wore in season 10 of Friends.

“Harry Styles and Jennifer Aniston wore the same outfit not once but TWICE,” Katz wrote. “So don’t you DARE tell me they’re not the same person with the ability to morph between time and space.”  A fan responded, “The multiverse we didn’t know we needed.”

Aniston reposted the t-shirt shot as well, with the side-eye emoji.