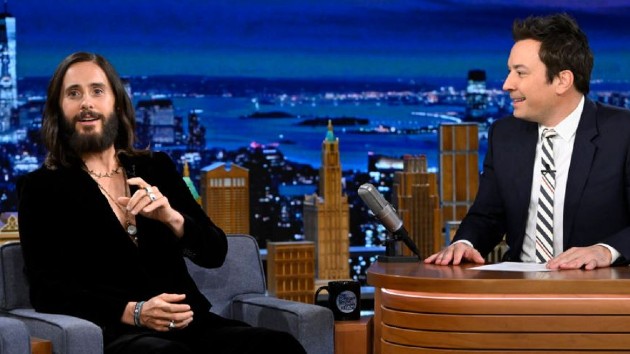 Jared Leto stars in Sony Pictures’ Spider-Man-adjacent action film Morbius, opening April 1, and during an appearance on Tuesday’s The Tonight Show, he talked about playing the titular character, and a possible connection to Marvel’s Sinister Six group of villains.

Leto plays the titular character in Morbius, whose attempt to cure himself, and humanity, of a deadly disease gives Dr. Michael Morbius all the powers of a vampire. The Thirty Second’s to Mars frontman told Fallon he was honored to be the first to bring the character to life.

“This is, like, the first time I’ve ever starred in a big Marvel movie like this and I’m incredibly excited,” he said. “It’s the first time that Morbius has ever been on the screen, so that was a big honor to get asked to bring this character to life.”

Leto says he’s had a fascination with vampires dating back to his childhood, thanks to his grandmother. “I saw the original Dracula because of her,” he recalls. “I was up late at night…I was sleeping on the floor, which you do when you’re a kid…and she let me stay up and watch the originalDracula with her and that’s when I fell in love with vampires.”

Fallon then pulled out a picture of Leto at the Spider-Man: No Way Home premiere, in which he was wearing a chain with the numeral “6,” and pressed Jared on a possible appearance by Morbius as part of the Sinister Six supervillains squad in a future Marvel film, many of whom we’ve already seen in past Spider-Man films.

A poker-faced Leto replied, “It was actually meant to be a nine, it just got flipped.”

Leto can currently be seen starring opposite Anne Hathaway in Apple TV+’s WeCrashed.