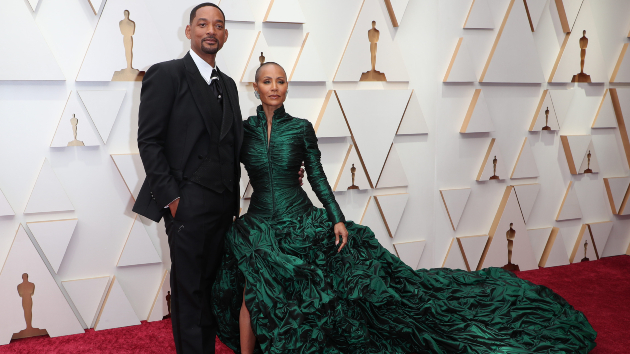 (NOTE LANGUAGE) Two days after the very shocking “slap heard all around the world” at the Oscars, actress Jada Pinkett Smith posted a note on social media.

“This is the season for healing and I’m here for it,” reads the message shared in a Tuesday morning Instagram note.

While the caption-less post didn’t directly address Sunday night’s incident, it’s the first time the 50-year-old actress has spoken publicly since her husband, Will Smith, slapped comedian Chris Rock in the face for a joke he made during the Academy Awards telecast about Pinkett’s shaved head.  Pinkett’s message also comes a day after Smith apologized to Rock and the Academy for storming the stage, smacking Rock and then twice yelling at him, “Keep my wife’s name out of your f****** mouth.”

“Violence in all of its forms is poisonous and destructive,” Smith said on Instagram Monday. “My behavior at last night’s Academy Awards was unacceptable and inexcusable. Jokes at my expense are a part of the job, but a joke about Jada’s medical condition was too much for me to bear and I reacted emotionally.” Pinkett-Smith has publicly stated she shaved her head after developing alopecia, which causes hair loss.

Addressing Rock, Smith wrote, “I would like to publicly apologize to you, Chris. I was out of line and I was wrong. I am embarrassed and my actions were not indicative of the man I want to be…”

The intense Oscars broadcast moment was viewed by millions — 15.36, to be exact — including Smith’s mother, Carolyn Smith who, in an exclusive interview with ABC affiliate WPVI in Philadelphia, said it was the “first time I’ve ever seen him go off.”

“He is a very even, people person…I’ve never seen him do that,” Carolyn said.

After the outburst, Smith went on to accept the Best Actor award for King Richard.

On Monday, the Academy said they are launching a “formal review” of the incident.