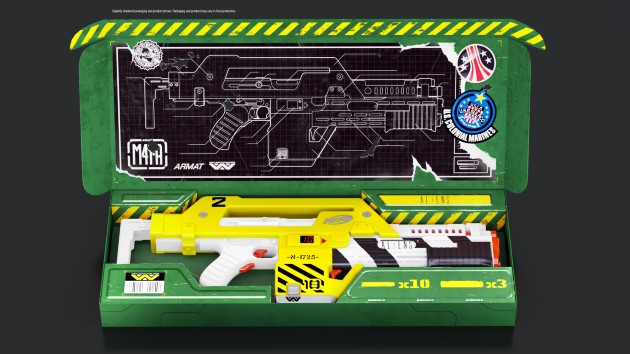 Fans of James Cameron‘s sci-fi classic Aliens will soon have the chance to own a replica of one of the movie’s most iconic props — but you might have to scan the toy section for it.

Nerf has announced a limited-edition replica of the M41A Pulse Rifle, the weapon carried by the Colonial Marines in the film, and of course by Sigourney Weaver‘s bug-stomping heroine, Ellen Ripley.

Just like Hasbro Pulse’s take on the Spenger Neutrona Wand — one of the Ghostbusters’ tools of the trade — the designers of the Nerf M41A painstakingly recreated the original Aliens prop.

Unlike previous Nerf collaborations with licensees like Star Wars, the Aliens rifle is hyper-accurate to the real McCoy, right down to sound effects and the red LED ammo counter on the side. In this case, the counter keeps track of the Nerf darts in the automatic rifle’s magazine.

And just like its sci-fi counterpart, the offering has a shotgun-style pump-action secondary fire feature, which in this case flings the fatter Nerf Mega Darts.

For safety reasons, the Nerf Pulse Rifle is colored to match the yellow and white color scheme of the Power Loader Ripley uses to bash the queen in Aliens’ climax, though that paint scheme likely is nothing crafty cosplayers won’t be fixing to match the movie’s prop.

The Pulse Rifle will be released October 2022, but they’re available for pre-order on Hasbro Pulse’s website and GameStop for $94.99.