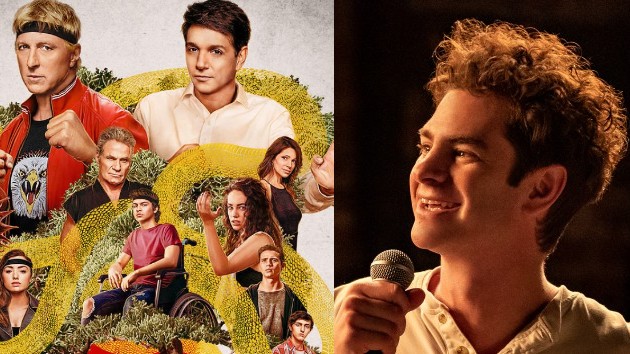 Andrew Garfield can be seen on Netflix in Lin-Manuel Miranda‘s musical film Tick…Tick…Boom!, and he can also now be seen absolutely losing his mind on NetflixGeeked’s social media. And it’s all thanks to a greeting from the cast of the streaming service’s Emmy-nominated Cobra Kai.

The Oscar-nominated actor has said he became “obsessed” with the Karate Kid spin-off series, telling Netflix he unfortunately “had to put that on the shelf” because of how long he’s been waiting for the forthcoming forth season.

To get him through, Netflix set up surprise video greetings to Garfield from Cobra Kai’s Ralph Macchio, William Zabka, Jacob Bertrand, Mary Mouser and Peyton List.

Via a split-screen, you can see Garfield, arms occasionally flailing, as he nerds out hard while the cast members thank him for being such a “superfan.”

Afterwards, Garfield wiped away happy tears, saying “They know I exist.” Clearly moved, he observed, “My body feels like Christmas.”

Fortunately, he won’t have to wait that long: Season 4 of Cobra Kai is set to be released December 31.