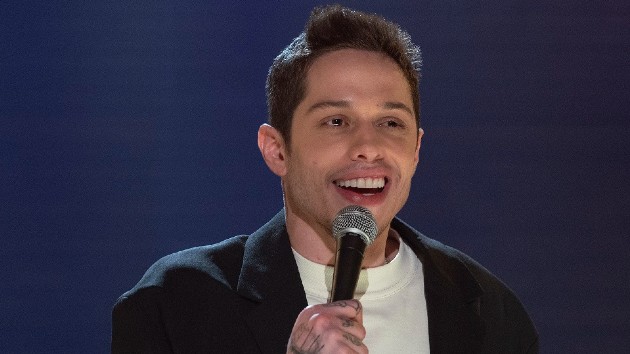 “Write what you know,” the old adage says, and Pete Davidson has certainly done that for new comedy material for which he mined his “weird year” dealing with Kayne West.

As most everybody on the planet knows, the SNL star is dating West’s estranged wife, Kim Kardashian, and the Donda rapper hasn’t taken too kindly about it on social media.

“I’ve had a really weird year,” Davidson said during a recent performance as part of the streaming service’s ongoing Netflix Is A Joke festival.

“I had an AIDS scare this year,” Pete admitted. “People are like, wow…are you having a lot of unprotected sex? Are you sharing needles?’ And I’m like, ‘No. Kanye told me I have AIDS. And he’s a genius…so I should get it checked out."”

Pete did, and declares, “My doctor said I don’t have AIDS. I just look like I have it.”

Davidson also sounded off on the custody issues between Kim and ‘Ye, noting, “Doesn’t anyone else secretly hope that Kanye pulls a Mrs. Doubtfire? I come home one day and they’re like, ‘This is the new housekeeper,’ and he’s like ‘What’s up, fam!"”

Pete also noted that given the high-profile nature of the controversy, friends really have no guidance for him.

“‘It looks pretty bad, bro. Good luck, sorry, here if you need…’ No advice, though,” Pete said to laughs.