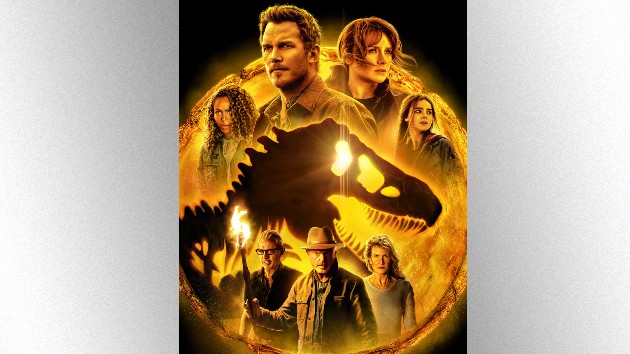 Early on in the trailer, we see the raptor that Owen trained, Blue, coming to visit Owen and Bryce Dallas Howard‘s Claire Dearing at home, with the reptile showing off her new babies.

However, one of the young creatures ends up getting dino-napped. Pratt’s character then pledges to Blue he’ll stop at nothing to get the baby back, from what appears to be mercenary animal traders.

Pratt’s Grady goes on to tap the series’ original stars to help, telling them, “I can use your expertise.”

“You made a promise to a dinosaur?” Goldblum’s Malcolm asks incredulously when Owen tells him of his vow to Blue.

“Yeah,” Owen replies with a shrug.

Meanwhile, dinos are running amok everywhere: Pratt is seen dodging them on a motorcycle in a cobblestone European street, and there are pterodactyls flying over New York City.

“If our world is going to survive, what maters is what we do now,” Dern’s character says.

With hair-raising escapes seemingly all over the world, the trailer shows that the reunited heroes soon come face to face with what Neill’s Dr. Grant calls “the biggest carnivore the world has ever seen.”