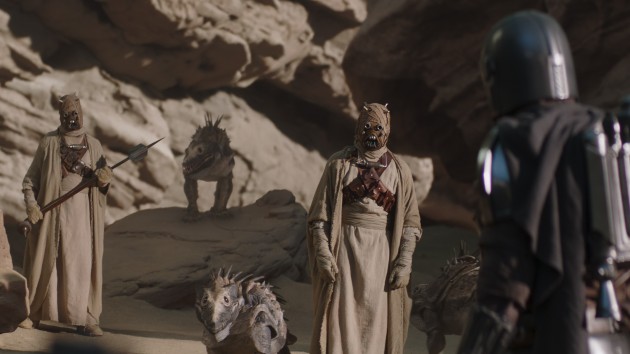 Before Troy Kotsur broke ground in Hollywood by being the first deaf performer to win the Best Supporting Actor Academy Award with his performance in Coda, he changed a galaxy far, far away.

One of the significant recent changes to the Star Wars universe came in Disney+’s The Mandalorian, in which the desert natives known as the Tusken Raiders were shown to be more than the baddies who mugged Luke in Star Wars: A New Hope, or who kidnapped Anakin’s mom, leading to her death, in Attack of the Clones.

Instead, when Pedro Pascal‘s Mando encounters some of them, he communicates using a form of sign language, showing their culture is deeper than previously shown. This thread was carried through into The Book of Boba Fett.

Kotsur developed the Tusken sign language, and played one of the characters later in the series as one of the masked natives. In an ASL video interview with the deaf blog the Daily Moth, he explained he was a fan of Star Wars since he was eight.

“Remember…in…1977…accessibility for Deaf people were limited, but that Star Wars movie blew my mind. It changed my life,” Kotsur signed. “Why? It was…so visual for me. For the first 5 minutes…The spaceships shooting, the robots…all of that overwhelmed my eyes. I watched it 28 times.”

He explained his contribution to The Mandalorian: “[M]y goal was to avoid ASL. I made sure it became Tusken Sign Language based on their culture and environment.”

He called the gig, “a blessing,” and a dream come true. “It is fate,” he signed.

Incidentally, if you want to know the sign for “Mandalorian,” Kotsur invented that, too: It’s based on the ASL for “M” and the shape of their trademark helmets.