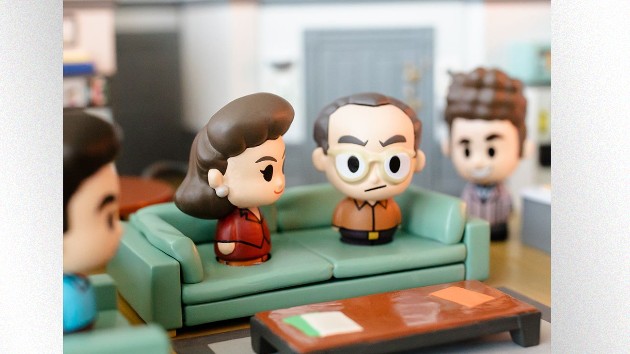 (NEW YORK) — The beloved “show about nothing,” Seinfeld, is coming to the world of Funko toys.

The bobble-headed pop culture collectibles line that has immortalized seemingly everything and everyone, from Transformers to the late Supreme Court Justice Ruth Bader Ginsberg, has has unveiled an upcoming Seinfeld line.

Not only will fans soon be able to get their hands on toy versions of Jerry, George, Elaine and Kramer, plus other characters from the sitcom phenomenon — like The Soup Nazi and Newman — but there will also be little playsets for them that you can assemble to recreate Jerry’s apartment.

Funko has apparently gone all-in on everything Seinfeld, from key chains, purses, backpacks and even t-shirts, all featuring the Funko-ized version of the characters, with some emblazoned with the show’s catchphrases, like “No soup for you!”

You can pre-order the toys now.  If history’s any guide, they’ll sell out fast.