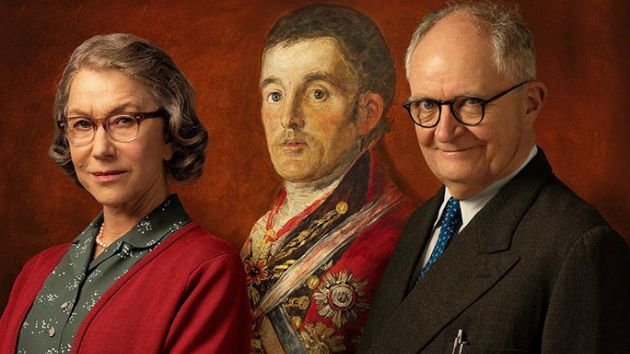 In the new film The Duke, Helen Mirren and Jim Broadbent star as Dorothy and Kempton Bunton, a real-life husband and wife involved in a famous art theft in London in the 1960s.

Mirren tells ABC Audio that the movie “wasn’t just a comedy…it had this tragic side to it as well where you genuinely are investigating the effects of grief on a marriage and on personalities along with a comedic caper.”

Mirren says she was particularly fascinated with Bunton’s argument in court that he “wasn’t stealing” Francisco Goya‘s famous portrait of the Duke of Wellington, “just borrowing it for a while.”

Mirren goes on to explain Bunton claim that he “was always going to give it back” and “wasn’t going to sell it or anything like that. So, you know, it was actually a very clever argument.”

In the film, when Dorothy gets stressed, she cleans, and the Oscar-winning actress says she can relate, admitting, “there’s something very satisfying about making your bath sparkle, your basin and the taps, you know, the faucets, as you say, in America.”

“I have to say, I had a very close relationship with my Dyson vacuum cleaner during COVID. I posted on it, you know, it had become my best friend, I absolutely loved it. And laundry…I genuinely love doing laundry.”

The Duke opens nationwide this week.