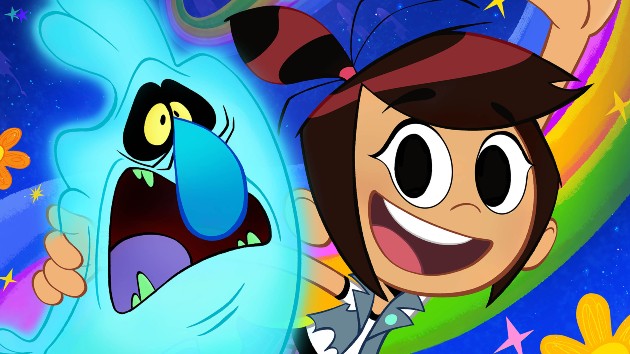 Launching on Disney Channel today is the Disney+-bound animated series The Ghost and Molly McGee.

Featuring the voice of Emmy-winning writer and Mythic Quest co-star Ashly Burch, the series has her starring as Molly, an ever-optimistic tween girl whose family moves into a new home, only to find her attic room haunted by a curmudgeonly ghost named Scratch.

“He curses her and says, ‘Wherever you go, whatever you do, I will be there haunting you.’ But Molly, being unflappable, kind of goes, ‘Well that just sounds like you’re my best friend now!’ Burch tells ABC Audio with a laugh.

“So it’s basically like an Odd Couple kind of thing of these two people that are forced to be together…But… over the course of several episodes, form this really cute, funny friendship.”

Burch explains she was first just called in to consult on the show, by creators Bill Motz and Bob Roth, but soon hooked into the character. “They were sort of like, ‘We’re we’ve never been a tween girl. Do you want to take a look at this…?’ And…I might have just flat out said, like, ‘Can I audition for this character?"”

For Burch, the show, which has already been renewed for a second season, is a dream gig.

“It’s so surreal,” the actress and writer admits. “I loved Disney when I was a kid, I mean, I had Little Mermaid bed sheets, I wanted to be Ariel…So it’s really, really cool to be part of not only part of a Disney show, but to be the lead of a Disney show and [not] only the lead…but it’s a musical!”

“10-year-old Ashly would be losing her mind if she knew,” she laughs.

The series officially launches on Disney+ 10/6.